Would you really like to disrupt the stale, old political system? Crush the two-party system? Get your pet party (Green, Libertarian, Communist, …) into the mainstream?

Then congratulations. You have a historic opportunity to do just that come November. And the method couldn’t be simpler.

Register to vote, and on November 8, vote for Hillary Clinton. And make sure your friends do, too.

What??? That hack, that old-style politician, that … (fill in the blank with the expletive of your choice).

It’s happened before, that one of the two major parties has completely disappeared from the American political scene — the Whigs in 1852. They were a party riven by nativism and racism (sound familiar?) who were trounced so badly and were so unable to adapt to American values that they simply went under. And now, 164 years later, comes the next opportunity.

When the Republican Party disappears, something will replace it. Our two-party system is a result of the Electoral College system, built into the Constitution. That won’t change, unless you think the two existing parties will agree to amend the Constitution to jettison it. The chances of that are slightly less than the chances that a meteor will destroy Earth by year’s end.

So vote for Clinton, drive the Republican Party out of existence, and lobby for your favorite party to replace it.

Are you one of those people who think there’s “no difference” between the two candidates? I heard one former classmate say he would “never vote for a liar.” I’m not sure if he meant Trump or Clinton, but look at that statement. “Never vote for a liar”? What does that mean? Is a “liar” someone who has ever told a lie? In that case, all living persons are disqualified. Perhaps he meant “habitual” liar. The old canard against Clinton is that she’s a “congenital” liar — a bit of nonsense coined by William Safire during one of the phony scandals ginned up by the Republicans. (By the way, all those “lies” cited by Safire way back when turned out not to be lies after all.)

But where there’s smoke, there’s fire, right? Clinton sure has been surrounded by smoke from time to time during her 40 years of public service. But there’s another possibility, isn’t there? The Great Republican Smoke Machine just loves to send it billowing her way. And she keeps breathing, much to their dismay. Let’s be clear — in 40 years, no scandal has ever been borne out. Not one.

If you think honesty is really an issue, I’d like you to look at one chart and read one article. Here’s the chart: 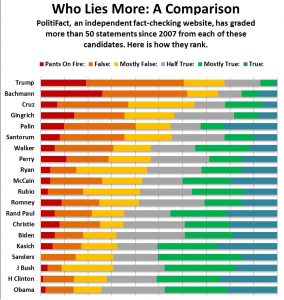 And here’s the article … This may shock you: Hillary Clinton is fundamentally honest

So what does this say? First, that Hillary Clinton isn’t the most honest politician in modern history, but she’s close, and her numbers are within the range of normal politicians like Jeb Bush, Barack Obama, even Rand Paul. She is, as the journalist Jill Abramson wrote, “fundamentally honest”. And Trump is in a league of liars by himself. Well, almost by himself; Michele Bachmann is in there with him.

The good news is that the American people have never elected a populist demagogue. And they’ve had the chance on occasion. I trust Americans to do the right thing, come November. But a narrow Clinton victory — or even a solid one, short of a landslide — will allow the Republican Party to continue its nasty ways.

A lot of my friends who want the revolution say Clinton is just another establishment politician; her victory would not be revolutionary. I agree that she falls well within the narrow (to a European) political discourse in the United States. She’s centrist to an American, center-right to a European, though Bernie Sanders has held her feet to the fire and kept her from wandering too far to the right.

But bear in mind that a Trump victory, should it lead to revolution, will be one of bullets, not politics. Trump is unique among major-party presidential candidates in that he condones, supports and even advocates violence if he doesn’t get his way. So that route won’t be a “revolution” like buying iPhones instead of Nokias. That route leads to bloodshed.

If you want a peaceful revolution … if you want to give peace a chance while making a difference, make the Hillary Clinton landslide a reality.

3 thoughts on “You say you want a revolution”