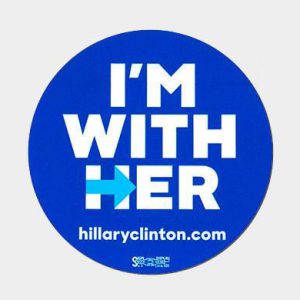 If there’s a man in your life who isn’t a vocal supporter of Hillary Clinton, this post is for you. And if there isn’t, read on anyway.

Election Day is just around the corner, and the stakes couldn’t be higher. This is surely the most important presidential election of my lifetime. You know where I stand. Hillary Clinton isn’t just a good candidate, she’s one of the best I’ve ever seen.

You probably know someone who doesn’t stand with her. Perhaps he hasn’t said which candidate he supports. Perhaps he’s muttered something about “they’re both the same.” Or perhaps he’s opening leaning over the edge of the chasm.

It’s been noted that all politics is local. I’ll go that one better — the best politicking is personal. The guy on the fence might be your brother, your cousin, your father, your son, your nephew. Here’s what I want you to do.

Talk to that man in person, not by phone. Let him know how you feel about Trump. Express your pain and your frustration that someone who has zero respect for women could be so close to the presidency. Then look your man in the eye and ask him to promise you that he will not vote for Donald Trump. He can stay home if he likes, just don’t vote for Trump.

This can have unexpected benefits. First, it might work. He might even tell others about his turnaround.

Second, even if he does vote for Trump, he’ll feel guilty and won’t urge his friends to follow his lead.

Third, you’ll feel empowered, and you can use this newfound strength to help the Clinton campaign get out the vote.

That last is what I’m doing. And for those without a man on the fence whom they can confront face to face, that’s what I’d like you to do, too.

Help out with a swing state — https://www.hillaryclinton.com/swingstate/